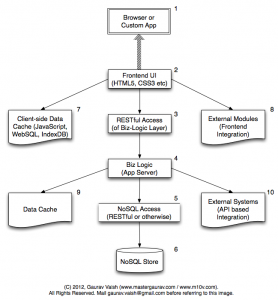 Part 1 of the series on “Architecture for Multi-Device Applications” focussed on the bare-bore design.

In Part 2, we look at high-level implementation structure – a slightly more detailed version of the design discussed in Part 1, before we start opening the individual boxes.

One of the key aspects that we discussed in Part 1 was the separation between the “Application Server” and “Web Server” layer and argued that most of the applications that we come across in real world, daily life, don’t really separate them… or rather we find them difficult to separate because of the choices that we have or we are “taught” in our life.

The diagram below summarizes what I am talking about…

Oh! Damn… doesn’t this diagram look horribly close to the earlier one? Where’s the difference / value-add?

Ok…. I heard you. As I said, this is still a high-level diagram but let’s look at now the options available within each box:

I hope the structure is now clear. In subsequent parts, we shall dissect open each box and explore: